The Out & Equal Global Hub 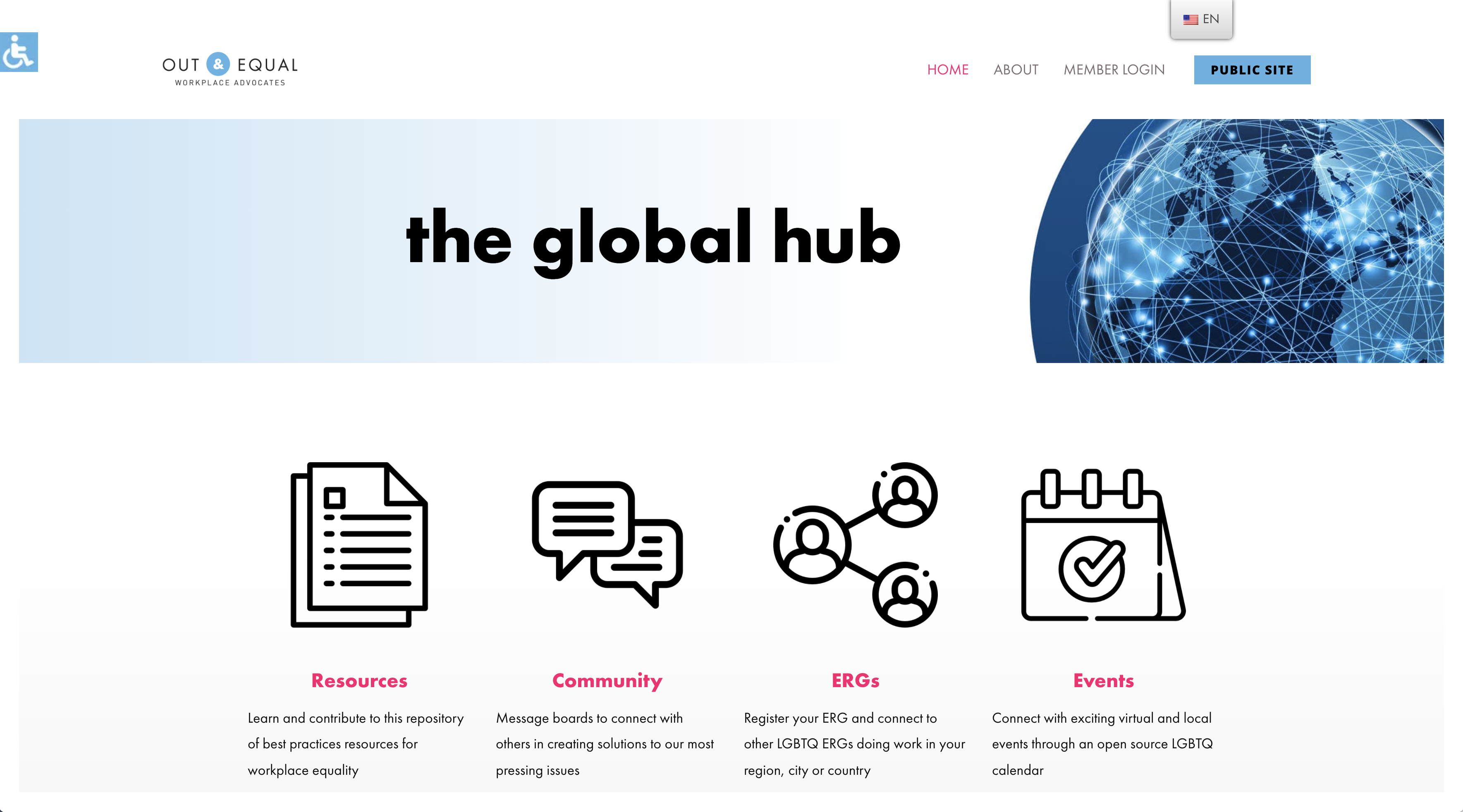 The Out & Equal Global Hub is a unique portal for partners, bringing together real-time problem solving, best practice sharing, global ERG mapping and more. In 2021, The Logical Alternative worked closely with the Out & Equal team to migrate the Hub from two separate platforms (a custom Firebase application and an InVision community portal) to one integrated site with enhanced functionality and greater expansion capabilities.

The Out & Equal Global Hub is a “one-stop-shop” virtual education and engagement center for executives, D&I and HR practitioners, and ERG leaders working for LGBTQ workplace inclusion. By connecting change agents working inside their companies and organizations for LGBTQ equality, The Global Hub serves as a revolutionary resource helping companies learn from each other and share information and resources in a number of different ways.

When we first met with the Out & Equal team in early 2021, they had a beta version of their Global Hub platform. The file sharing resource side of the Hub had been built as a custom Firebase application, while the community portion of the Hub had been created using InVision, which is a standalone community solution with message boards. There were some challenges and limitations, however. The two sides of the application didn’t really work smoothly together, managing the hub was very difficult for the Out & Equal admins, the file sharing application was cludgy and limited in its organization and search capabilities, and other features, such as GDPR compliance, site translation, file security, accessibility, zoom integration, and versatile event creation were missing entirely.

We contracted with Out & Equal to approach The Global Hub 2.0 in several phases. First, we worked with them to secure the existing Firebase application. Next, we worked with the team over several meeting sessions to explore each of their involved features and the exact improvements they wished to make, breaking each feature set down into its details.

Next, once that list was completely understood, we began the project to develop the new version of the Hub. And finally, my partner Evelyn developed a set of custom scripts managed by a web application to handle importing all the existing document data from Firebase, and the existing user data and content from InVision. This was done so that we could drop the data and refresh it throughout the testing process, and one final time when the site went live.

Early on in the process, Evelyn and I discussed the possibility of using WordPress as a framework for developing the Hub 2.0. While many of the features were custom and unique to the Hub, we were convinced that it could be done using a combination of carefully selected and configured plugins, custom plugins written specifically for the hub, and integration with custom scripts used to connect with other APIs being used by the organization, such as Salesforce. If we could make it work, we knew that it would mean a greatly improved admin experience for the Out & Equal team, and a robust and infinitely expandable solution moving forward. Rather than have to maintain what would be a large code base, the O&E team themselves could keep plugins up to date and make sure the application remained secure. They will also be able to add any features they want in the future, without having to reinvent the wheel. It would also save them a great deal of money, and give them the ability to budget for licenses and updates at the same cost every year.

As we dug into the feature set requirements, we knew that the approach we planned to take would be challenging, but we were excited to see the final result.

The first challenge came when we selected what was arguable the most important component of the site—the document library plugin. It’s not an area where WordPress excels, and there are only a handful of components with anything even close to what Out & Equal had in mind. So, we knew there would be custom development needed. We ended up choosing Document Library Pro, as it came closest to the search and filter capabilities that we wanted. We added the ability to filter on custom fields, which had been missing from the beta version of the site. This allows Hub members to narrow down the type of resource they needed. (show features)

Another important requirement was that Corporate Admins, who are the Hub members with permission to upload documents, would not ever see the WordPress back end. Since Document Library Pro is designed to work through that back end, this meant developing our own front end to talk to the plugin. For this, we used Gravity Forms to directly insert uploaded documents and all their data into the DLP table.

We also needed those same Corporate Admins to be able to edit and/or replace only their own documents, and not those of other Admins. This required more custom development by Evelyn, to allow the DLP front end to display only those documents belonging to that organization. The final result is an elegant solution that met every wish list requirement.

The next core feature of the hub is the Employee Resource Group directory. Again, we needed Corporate Admins to be able to manage their own ERGs, to connect ERGs with more than one location, to display them all in an attractive way on a map, to allow photo and video uploads. We also needed this directory to be searchable by members using different criteria.

One feature that had been missing in the beta version was an attractive company directory and member directory. We were actually able to create this using a free plugin as the base, but wrote custom code to integrate it with the user permissions to give Company Admins the privileges they needed. We also used an invite component integrated with that free plugin, modified by Evelyn, to allow those same Company Admins to invite a finite number of new team members, see whether or not those invitations had been accepted, resend them, or delete them if the person was no longer with the organization.

Another requirement was for any Member of the Hub to create events. The Event system that we configured allows in-person events, online events, and hybrid events, can be configured with tickets and/or RSVPs.

That brings us to the community area of the site, where members can discuss various topics. Again we used a free plugin, but modified to allow custom fields such as pronouns, which the members can manage through their own member profile.

The site is also equipped now with translation, to which new languages can be added at any time, and accessibility features, which allow all members to configure their own settings. GDPR compliance has also been implemented. Most recently, Evelyn developed a custom web app to allow Company Admins to manage some of their information in Salesforce, such as uploading new logos when needed.

Thanks to careful testing, our launch went smoothly in December, and the Global Hub 2.0 is a success! As part of the final deliverables, we created this spreadsheet which sums up all the plugins used on the site, along with their license renewal dates and costs, so that Out & Equal can budget for their yearly license fees. That’s their only recurring cost for a solution that can grow infinitely into the future.